July’s event will be the biggest in Lithuanian Paralympic sporting history.

The organising committee of July‘s IBSA Goalball European Championships men and women A in Kaunas, Lithuania, have launched the competition emblem.

Taking place between 5-12 July, the Championships are the biggest event in Lithuanian Paralympic history 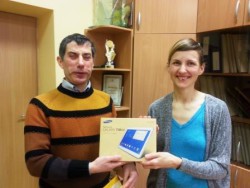 and the new  emblem depicts a “Night Owl”, a bird that is hunting in the night, with extremely sharp  ears, beautiful, noble and European.

“We wanted to leave behind other Olympic logos, where most often a man’s silhouette and  motion is shown. I was looking for an animal, plant or bird to become a symbol and  unexpected correlation for blind people‘s sport,” said designer Lina Sasnauskaite.

“The first association with goalball for me was a bat which flies in the night and orientates according to a sound. But the danger was that bat can be understood in a childish way as a symbol for superman or batman. Suddenly the bat turned into an owl and I said – why not? 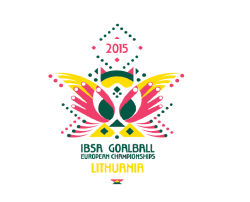 “An owl is a bird that is hunting in the night, a beautiful, noble and European bird. That is how a “Night owl” logo for the IBSA Goalball European Championships was born. At the same time the idea was not to make a zoo-like logo, so I incorporated elements from goalball game: hands, ball, eyeshades.”

Lithuanian Blind Sports Federation will print the logo embossed, so that blind people can feel it.

“We chose this “Night owl“ logo because it looks really unique, is based on a strong idea and has no boring elements: a man, black eyeshades and motion in attack or defence position,” said Linas Balsys, President of Lithuanian Blind Sports Federation.

The article was taken from official Paralympic page –> http://www.paralympic.org/news/emblem-ibsa-goalball-european-championships-launched